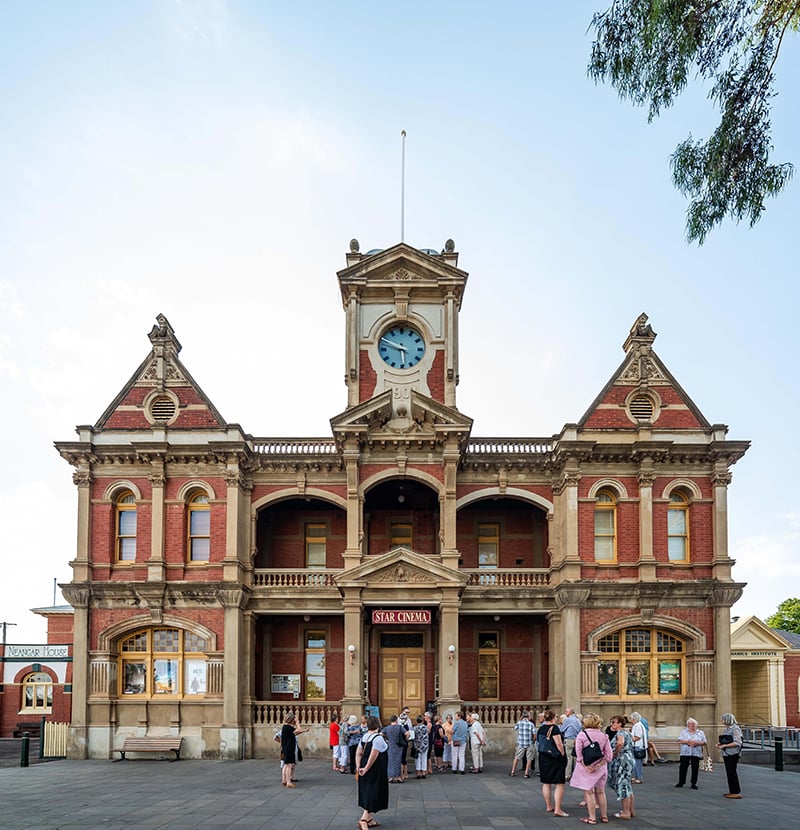 The first move for a “New Town Hall” was made in June 1897 and the present building replaced the earlier building and was opened on 14 August 1901 by the Mayor, Cr George Loudon. The architects were the Melbourne firm of Wilkinson and Permewan. As a much larger and more sumptuous building of brick and stone featuring a central clock tower, the new hall reflected prevailing architectural fashion and was a remarkable investment for a town consisting predominantly of poor mining families. The condition of the town hall is substantially as built. The design is almost identical to the Castlemaine Town Hall. Today you can climb the staircase to view the council chamber, the committee room, and mayor’s private room, all of which are handsomely furnished. Portraits of the former mayors and a collage of early pioneers grace these walls. Cinema has played a major part of this building for almost 100 years. The original cinema, known as Star Pictures began operating in the early part of the last century, however, like many cinemas, it closed in the 1960s due to the popularity of the recently introduced medium of television. Star Cinema utilises the original projection room and ticket booth that were functioning in the first half of the 20th century.

View the stately foyer and the grand decommissioned Borough of Eaglehawk council chambers complete with original antique furniture and mayoral portraits. In addition, there will be limited access to the original projection room outside of films screening times. For screening information visit, www.starcinema.org.au. Members of the Eaglehawk Heritage Society will host talks about the Town Hall and other civic buildings in the vicinity in the council chamber at 11am, 1pm and 3pm.